We made it home from our road trip! Robert and Wendy are married and off honeymooning in Mexico. 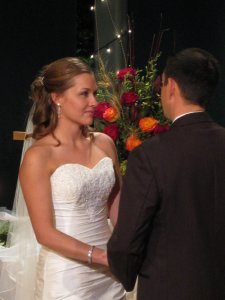 We had many adventures along the way. We picked up a new friend named Hugh. He was 100 ounces and could be refilled for just $2. Which we did … many times. 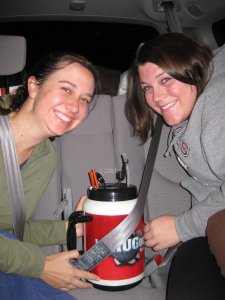 The most outrageous event of our trip, though, happened on the way home. I will do my best to recount it for you, moment by moment.

We were about 45 minutes into the drive. It was a Sunday morning so there was no traffic and we were cruising along nicely at 80 miles per hour. It still very dark out. The girls were sleeping in the back seat and a Jack Johnson CD was playing softly. It was very peaceful.

Suddenly, out of nowhere, we saw a large dark shadow appear just to the right of the car. It looked like a mini airplane coming in for a landing. Right in front of us. We saw a shadowy blur of a body and wings spanning maybe four feet. The next second there was a loud THUD and an explosion of feathers.

Although the noise was quite loud, the car barely slowed. We debated stopping right away, but the car seemed to be running fine so we decided to wait until it was light out. We figured there might be a small dent and a little blood.

When we stopped at a gas station to fill up a little later we hopped out to assess the damage. This is what we saw …

Half of a large goose was mangled into Jamie’s cracked and broken fender.

And to give you some perspective …

Thank the Lord the goose wasn’t three feet higher. It would’ve come through the windshield.

But seriously? Jamie had graciously allowed us to drive her sweet new Rav4 across the country and I wreck it by hitting a freaking goose.

Not too much longer, during our next gas stop we happened to pass this …

7 thoughts on “The Grey Goose”