It’s been kind of heavy around here lately. Lots of hard stuff going on in the world. But today’s Friday and I think it’s time for something lighter. Happy weekend, everyone!

So last summer I did something crafty. This is significant because I am not the least bit crafty. But Pinterest was made for non-crafty people like me. And now that I’ve resumed my blog, I’m finally getting around to sharing my first project.

We’ve had these eight metal folding chairs stored in our garage. We would use them whenever we needed extra seating. They were castoffs from our church. They were gold and maroon – straight out of the seventies, but not in a cool vintage sort of way. Just in an outdated, ugly way. Here is what they looked like.

Inspired by a post on Pinterest, I decided to see if I could make them into something cute that I’d actually be proud to use. (We were using them like this, but every time we did, I died of embarrassment inside.)

So the first thing I did was disassemble them.

It was easier than I anticipated. I just popped the seat and back right off. Then I sprayed them with primer.

I’m not sure this step was totally necessary but I wanted to be sure the gold was gone. For good.

Next I sprayed the chairs with their new colors. 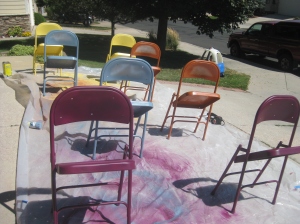 This was actually the part that took the most time and also used more paint than I thought (almost a full can of paint per chair.)

After they were fully painted, I covered the seats and backs with new fabric. I found some black and white, vintage-looking polka-dotted fabric at Walmart. (You probably know how I feel about Walmart, but since I wasn’t actually sure how the whole covering-of-the-chairs-thing would go, I didn’t want to spend loads of money on fabric from a fabric store.) Thus, I shopped at Walmart.

Oh and I also had a to buy a staple gun. (Now that I own a staple gun, I’m pretty sure I’m on the way to becoming officially crafty.) Also, I have no pictures of this part. My first time using a staple gun required my full attention.

The seat recovering went well, but took longer than I thought. But upon viewing the finished product I decided my time was worth it. 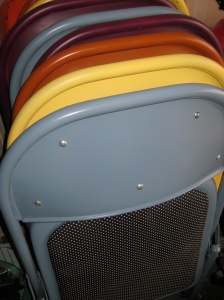 The whole project cost about $80 (most of which was for paint) and took about 10 hours. However, now whenever we need extra seating, I’m excited to bust out the polka-dot chairs.