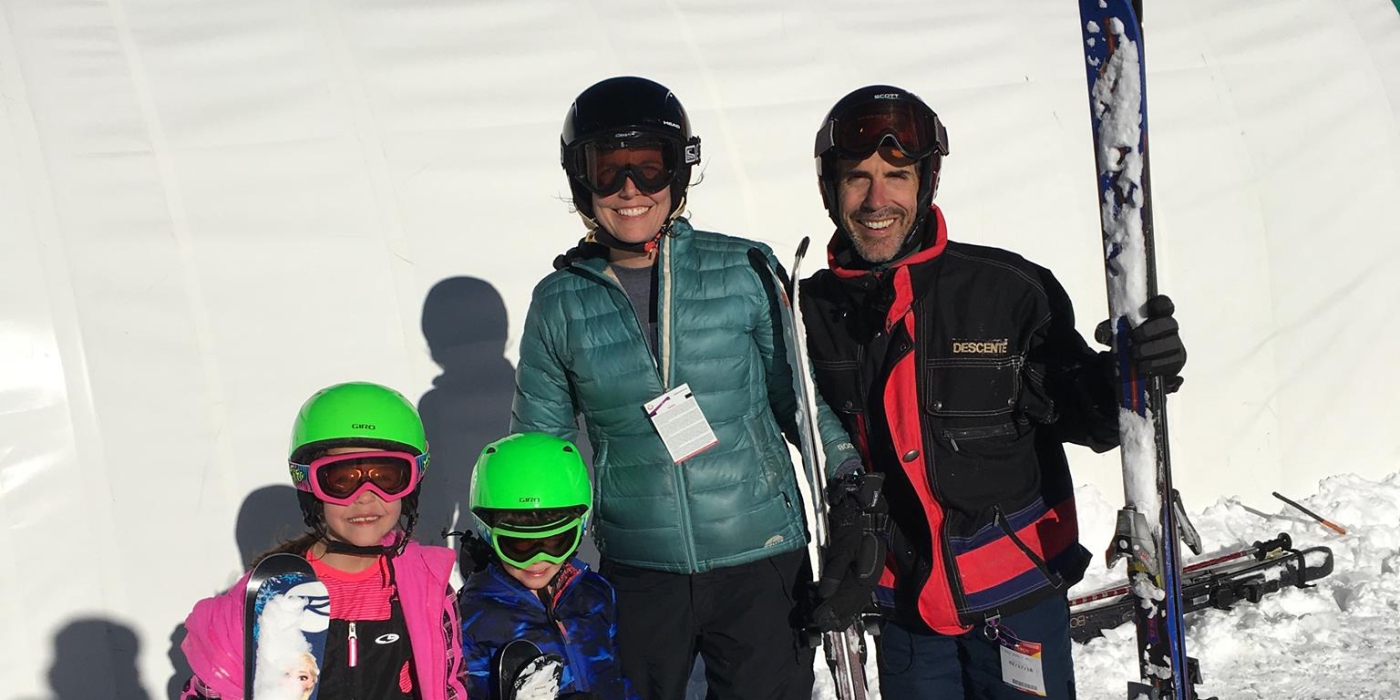 I have been afraid of skiing for 25 years.

As a Colorado native, this has been a lifelong source of shame for me. I grew up with people who lived for the winter and went literally every single weekend. My school clubs and youth groups would take annual ski trips and I would always sit out, pretending like I had no interest in skiing. But inside I longed to know how to ski. Everyone always had so much fun.

I had actually tried skiing one time growing up. The first and only time I went, I was 15 and at the height of my self-conscious “the world is staring at me” phase. I was literally self-conscious about everything. I didn’t have the right gear, I didn’t know how to stop or turn. I fell getting off the ski lift every time (or at least that’s what it felt like). I spent the day trying not to fall.

Then “the incident” happened. In line for the dreaded ski lift, my skis began to slide between the legs of the skis of an older teenage guy in front of me and I could not stop them. I wiped out. Between his legs. While he’s trying to board the ski lift. I was mortified. And although he was covered from head to toe in ski gear, I just knew he was the most good-looking guy there, and the last one I wanted to humiliate myself in front of.

That was it. I decided I was done with skiing forever.

It sounds ridiculous, but 25 years later as I write this, I am swept back into my 15-year-old sense of self, humiliated and hyper aware of what I assumed others must be thinking. Even now with the perspective of maturity and time, I know that most people there were also learning (it was a beginner lift, after all) and were probably barely even paying attention to me. Or maybe they even felt a sense of relief and camaraderie that someone besides them fell too. But all the feelings, misguided as they were, were very real.

Over the years, that one moment and the associated feelings defined skiing for me. And it grew into something much bigger. Something all-consuming. Something paralyzing. Everything about the thought of skiing caused me anxiety. And since I knew I was blowing this fear out of proportion, I was also ashamed at the size of my fear.

So between the fear and shame, I wanted nothing to do with it.

As a young adult, when I was invited on group trips, my standard reply was to decline with a joke about being the “Colorado native who doesn’t ski.” And although I always felt a little sad that I had given that fear so much power over my life, I had just accepted that I would be the one who didn’t ski.

When I met Chris, I learned that he had moved to Colorado to ski. After leaving the Air Force, he could literally pick anywhere to live, and he picked Colorado so he could ski. Which he did … a lot. He became one of those every-single-weekenders. But we started dating and as I “don’t ski,” it hasn’t been a part of our life together.

Then we had kids and for the first time in my life, I had something bigger than my fear. I had the desire to save my kids from my fear. I desperately wanted them to learn to ski.

The first time Chris suggested going skiing as a family, I said “No.” We got the Epic Kids ski pass “just in case.” Because it was free, we took the kids to Keystone for their first lesson, but I projected all my fear onto them and assumed they’d give up quickly.

As Chris and I stood on the side of the hill watching our kids try and succeed at something that I was so afraid of, I knew in that moment that if I was ever going to share this with my kids, I had to conquer my fear. I had to learn to ski now.

So we scheduled a family ski trip. I took a lesson. The day was a wild mix of emotions. Fear. Anxiety. Pride, Determination. Frustration. Elation. At one point, I let fear crawl back in and I got so scared that my goggles literally started filling up with tears. But my kids, already at the bottom of the hill, watched me finally slipslide down the hill I was terrified of and they were proud of me.

After that emotional rollercoaster of that day, and especially seeing how quickly my kids were learning, I knew we had to go back. So we planned another day a few weeks later.

That day was yesterday.

And you guys, I am happy to tell you I learned to ski! I took another lesson, this one with just one other student and a really good instructor. (Shout out to BenJohnson! at Monarch.) Something finally clicked. I learned to get off the lift. I learned to parallel turn.

Yesterday I told my fear of skiing to GET THE HELL OUT OF MY LIFE.

And the pure joy of my day was spending the last 1.5 hours with my family, skiing down green runs. All of us together. My kids following me back and forth across the hill, like little ducklings, my husband skiing circles around us.

Freedom from fear is a beautiful, God-filled, life-giving thing.

3 thoughts on “Freedom from Fear”